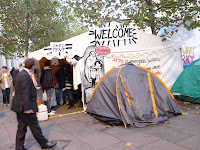 I spent the morning listening to property developers and council officials vaunt the merits of The City. According to Peter Rees, the long serving planning officer for the City of London, success is down to two factors: the Big Bang (or deregulation of financial markets) and him. He might well have succeeded in making the City richer in the past 25 years (and not just in modern architectural heritage), but I’m a bit worried about his argument going forward. Frankfurt and Dubai aren’t serious competitors, he said, because no matter how many tall buildings you put there, they will never be the destination of choice for a dirty weekend. Given the makeup of the audience at the NLA conference, I’d say Mr Rees is used to speaking to a mainly male audience…..

But I quite liked him. He was certainly the most entertaining speaker of the morning. Others were more modest. Iconic buildings are going out of fashion, said Martin Jepson, SVP at Brookfield, and the focus for development going forward will be smaller, with a focus on the interior rather than the exterior: boutique offices for boutique clients said Richard Taylor, head of commercial at EC Harris. Ken Shuttleworth said the era of glass is over. Throughout the morning I noticed that ‘SME space’ seems to have replaced ‘mixed use’ as the new buzzword.

Cycling back from the all day conference, which finished with a tour round the London Fruit and Wool Exchange (a one-time haunt of Jack the Ripper which Exemplar and the City of London are hoping Tower Hamlets approve for a 320,000 square foot office and retail scheme), I stopped by Paternoster Square, where student protests had joined Occupy London. After a day of suits, it was a refreshing contrast. The protestors have got organised, with a cleaning rota to ensure the good folk of St Paul’s are no longer upset by finding human waste desecrating the steps of the church (‘Dirty Protest Soils St Paul’s in last weeks Sunday Times) and a Tent City university, where debates on capitalism and much more (involving the Guardian’s Polly Toynbee – and I understand some brave City types) offer free education – and a chance to speak up – for whoever stops by. I even spotted a few suited types peering into the Information Tent (and I read a great story on the plane about a drunk copper spending the night in a tent, thanks the hospitable protestors).

That’s one of the things I love about London. I spent the day hearing City types talking about how to make themselves richer (note: their meeting was closed doors), and a few minutes down the road, crowds are gathering to debate how these riches should be shared. If this last image is to be believed, something (or rather someone) is needed to make the debate that much richer (although I think they are missing an ‘m’) 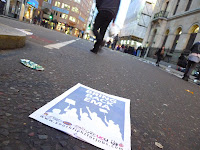 Algeria: Creating the path beyond oil

Really enjoying hearing the dulcet #Scots tones, especially of @decenthumanbean as they talk about their forthcomin… https://t.co/jilWSXgCn9

My little monkey enjoying jungle #storytelling with @Talesfromthedr1. Thank you @BSCFestLit for opening up your pri… https://t.co/Dd7EDdXHgp