Home A day out with Heritage of London 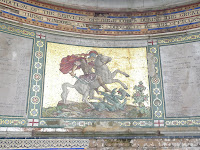 What have a dilapitated terrace in Hackney, a 14th century pub in Newham, a bombed out military church in Woolwich and a concrete house in East Dulwich have in common? All are buildings at risk, and the Heritage of London Trust is battling to save them. To that end, it took John Howell, MP, an adviser to Minister for Cities Greg Clark, and officials from the National Lottery Trust, the Prince’s Regeneration Trust and others on an afternoon bus tour, on which I hitched a ride.

Despite the (rare) presence of a Tory MP in red Hackney, there was quite a turnout to welcome us, from the Lord Lieutenant to the cabinet member for planning. At stake is a falling down terrace in Dalston Lane. Apparently, the site was sold by the council to developers in 2002, but permission to demolish the terrace was refused because English Heritage found the houses to be “remarkable suvivors of Georgian architecture”. The council then declared the terrace a conservation area in 2005, but since then nothing much has happened except the occasional building burning down….

Next up was the Spotted Dog pub, the second oldest building in West Ham and possibly once the kennels for Henry VIII’s hunting dogs… Before seeing it, I was skeptical about its viability given that finding a modern day use for a pub in a mostly Muslim area is not going to be easy. But the building has serious charm, a mix-matched warren of seriously old 14th century timber frames, and modern ye-olde style fibreglass. It does have a feel of history about it, and it would be a shame for it to go. Interestingly, the architect that is working on the Spotted Dog is the same who brought the St John’s Tavern in Archway back to life. Quite a coincidence then that a few weeks I was dining there with a friend, who remarked on how the renovation of the St John’s had sparked regeneration along this rather sad stretch of North London. 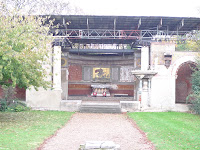 The jewel of the visit, however, was St George’s Chapel in Woolwich, still the church for the Royal Artillery Regiment and right next door to the Olympic shooting venues. Hit by a flying bomb on 13th July 1944, only the apse remains, housing an exquisite golden mosaic of St George and the Dragon. When we visited, it was being protected by a crinkly roof, but funds have been secured and this was shortly to be replaced with a more permanent roof structure. Plans are also afoot to install catering facilities, which would allow the garden to be used for corporate functions during the Olympic Games. It’s an elegant and strangely peaceful place, to me reminiscent in some way of the ancient ruins of Pompei. The Olympics affords an opportunity to amass some cash, but the long term future will depend on the community rallying round to care for it.

Finally, we visited Britain’s oldest concrete house in East Dulwich. A rather ugly building, I thought: it’s gothic architecture was behind the technology. Fans claim it should be saved for the nation because the 1873 building was a technological frontrunner – and if only Britain had followed through, the Americans and the French wouldn’t have stolen a lead on concrete construction.

All in all, what was interesting about the day was the energy and ethusiasm that Heritage of London, local residents, council workers and others put into saving some of the treasures from our past. A mostly thankless task, they won’t scrabble together enough money to save everything, but how wonderful that they try. Not all of the buildings will – or perhaps should – be saved, but the world and Woolwich would be a poorer place if this marvellous mosaic, which had been left to the elements, were allowed to crumble.

Why London and Paris should talk more #1

Protecting views across The Thames