Alex Salmond – and the importance of visionary local leaders

Home Alex Salmond – and the importance of visionary local leaders

Alex Salmond – and the importance of visionary local leaders 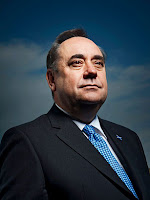 For some reason I can’t fathom, England doesn’t seem to be keen on regional and local politics. The north of England voted against regional parliaments, kyboshing the previous Labour administration’s devolution agenda. And when they had the chance to vote for directly-elected mayors in 2000, only 37 local councils (out of 353) held referendums on their introduction, and most voted against (25 against to 12 introduced). It may be that local politicians have so little power in the UK that voters don’t see the point. Or they may buy into the theory that corruption in politics is endemic at local level (although if this is true, better to make the local politicians democratically accountable). England will shortly be given the chance to vote again for mayors – and I hope they see the light.
In Scotland, Alex Salmond’s leadership has recieved a plethora of accolades, and even international recognition. The London-based Times voted him Briton of the year. Apparently (Murdoch’s firewall prevents direct consultation) the newspaper hailed the SNP’s win and a first ever majority government at the Scottish Parliament in a system designed to prevent exactly that. “He persuaded voters that he was a man of bold vision, a man who, with charisma, would be able to do things differently.” Salmond is a captivating speaker who is bringing much-needed confidence and ideas to Scotland , and for whom I have great respect (even if leaving a room after hearing him speak, some of the magic falls away and you think ‘hang on a second’). 2011 has been his year with awards including “Best Politician” at The Scottish Green Energy Awards and the “South Australia International Climate Change Leadership Award” from the government of South Australia. He was also named “Politician of the Year” by the Spectator magazine, the Herald newspaper and The UK Political Studies Association. BBC Radio 4 spoke about the inspiration of local politicians making things work for the places they know well.

Ken and Boris have both raised the profile of London politics, fought for London, and won respect for doing so. The dominance of Westminster in British politics is such that more regions should be clamouring for respresntation. The South East keeps claiming to be the bread-winner for the rest of Britain, but if policies were designed to stimulate other parts of the country and not just the South East, you would see a more balanced economy. If The Times of London (as the newspaper is known internationally) recognises the benefit of Salmond, hopefully this will inspire other parts of the UK to challenge the London dominance and show they have leaders with the talent, charisma and vision to make their economies and communities vibrant and confident and just as valuable as the South East.
December 28, 2011 / Planning
Like this post!

Let there be jobs

How the Olympics can help… Lille?

Congratulations @FeliciaMYap on the launch of Future Perfect. May it sell like hotcakes @headlinepg https://t.co/CbN6rhr1pp