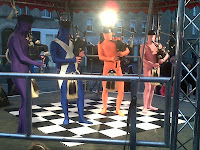 Way back when, before Edinburgh was the self-proclaimed New Year Capital of the World, Hogamanay was a much simpler affair. Everyone met at the Tron church for the bells, some midnight snogging occured, then everyone queued up to kiss the policemen and women. Then Edinburgh decided to build on its reputation for festivals and Scotland’s reputation for New Year celebrations, and the party went professional. The city made the unlikely but prescient bet that tourists could be persuaded to come for an outdoor party in a freezing country where its likely to be either snowing or raining. Princes Street was closed off to become a party street, with bands playing from every corner. Only people with tickets (a proportion of which were initially free to residents) could enter. To get a seat in a pub required an early start, which in turn required stamina to last until midnight. 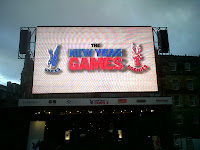 Tourists appeared to enjoy the Dec 31st celebrations, as they kept coming back 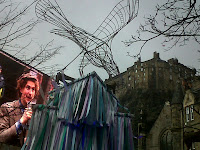 in every greater numbers. Little thought had been given to what they might do Jan 1st, where almost everything bar the hotels was closed. That, I am happy to report, has all changed. Museuems are now open from 12-4, and bars and cafes – even a few shops – are bustling for business. Moreover, Edinburgh has invented the New Year’s 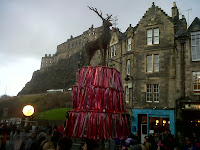 Games , with events all over the city centre pitting Uppies and against Doonies. You chose which team to support, with a basic guide that if you are from the north of your town or country you are an Uppie, and self-styled southerners are Doonies. I thought this highly creative and inventive, until an internet search revelead Edinburgh was probably not the first (although they deserve kudos for adopting the idea). Four venues including St Giles Cathedral, the National Museum, The Hub and The Grassmarket, hosted games which were fun for both adults and children. A minotaur was loose in the cathedral, and against a backdrop of beautiful music, you could sneak into his labyrinth and steal a ribbon off his back – if he didn’t spot you moving first. It was beautiful, artistic and enticing. Ribbons were then translated into coins, which needed to be taken to Grassmarket to add to your team’s tally. There, various activities including – when we were there – a humming game (essentially guess this song with humming), provided more entertainment.

Compared to many quiet town centres across Britain, Edinburgh was humming. And as the city branding competition intensifies, that must be a good thing for the place. 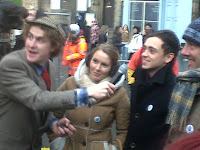