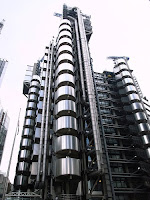 Since a gentleman I once knew gave me a ‘new-to-London’ tour of The City, I have been in love with the Lloyds building, whose inside-out architecture appeals to me in a way the Pompidou Centre in Paris never did (although I did enjoy the view and cocktails on the roof). I’ve also become aquainted with the British obsession with heritage status – an oddity for me after years of living in the ultimate museum city of Paris. I had adopted the French view, perhaps inspired by skyscrapers of The City, that England was more laissez-faire.
Interesting so, that modernity of The City and heritage status obsession should find common ground in the celebration of one of my favourite buildings: only 25 years-old the Lloyds building now enjoys Grade 1 listed status.
According to The Guardian: “The listing was recommended by English Heritage. Its designation director, Roger Bowdler, said it was “fitting recognition of the sheer splendour of Richard Rogers’s heroic design. Its dramatic scale and visual dazzle, housing a hyper-efficient commercial complex, is universally recognised as one of the key buildings of the modern epoch.””
Hyperbole aside, for me Lloyds is about trying something new, something that took many people a bit of time to get used to, that drew our attention to parts we had been hiding. I find the building ugly and attractive in equal measures, but it grows on you in the somewhat-inexplicable way only great buildings do.

Women and children’s rights in the Ukraine