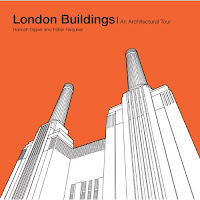 A friend gave me this delightful book, London Buildings: An Architectural Tour by Hannah Dipper and Robin Farquhar, to review. It celebrates an eclectic and personal selection of London charm with simple pen and ink drawings.

The book is unafraid to be totally subjective: it includes for example The Pump House in Battersea Park, where the authors were married. Famous (and sometimes unloved, often contraversial) places such as the Brunswick Centre, the Barbican, Vauxhall Bus Station, much of the Southbank and Centre Point feature, as do lesser known places such as Gasholder No. 8 in St Pancras (whose restoration is part of the Kings Cross redevelopment – but only after residents objected to its dismantling) and Maggie’s Cancer Caring Centre (winner of the 2009 RIBA Stirling prize).

My friend was not impressed: why would anyone trek out to deepest East London to admire the Balfron Tower, or its more celebrated cousin, the Trellick Tower (pictured), in West London? Quite possibly many people wouldn’t care that Erno Goldfinger was inspired by Le Corbusier’s unbuilt scheme for Algiers – architecture fans excepted.

As for me, I’m a big fan of the urban landscape and would much prefer to take my camera to old canal-side warehouses than to the grand signature buildings photographed a million times. So I found this unusual selection quite inspiring. I would say there isn’t enough regard for people who use these buildings. This probably wasn’t the intention of the architect authors, but is what interests me. No matter how important architecturally, I’m unmoved by Brutalist fans who campaign for the Balfron Tower or Robin Hood Gardens with little concern for those who live in them: the buildings should first and foremost serve the residents, whose happiness (or otherwise) will be reflected in the surrounding public space. It is endlessly fascinating to me that the Kensington version is a place people aspire to live in (possibly because the right to buy scheme led to more home owners insisting on proper maintenance), but the Tower Hamlets scheme is sadder. There are lessons to be learnt there!

But back to the book. The drawings are light and beautiful and the presentation is simple and unpretentious. Perhaps it’s not a book for the general public, but I loved it.

Stubbing your tongue on TLAs

Africa’s Contribution to the Green Economy

The Pinnacle, the Cheesgrater and the Walkie Talkie