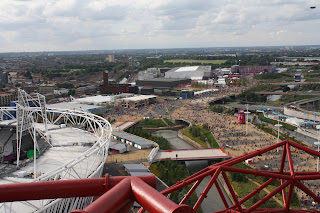 Two years of research, countless site visits and conferences: still nothing prepares you for the sheer thrill of stepping onto the Olympic Park when the Games are in full swing. It is blinkin’ marvellous. I even came to develop an affection for The Orbit, whose external ugliness I have been blaming on Boris’ indifference. Yet the view from the top is really special and I predict we will grow to love it. Maybe not to the same extent as Paris has done with the once-hated Eiffel Tower, but I can really see it breathing life into the plaza below.
The second thing I keep thinking about following my visit on Day 3 of the Games is the little mentioned wild flowers. Not only do they show Mitt Romney that we were very ready (no new build has time to develop such sophisticated landscaping: our buildings were ready a year ago), but they also signify the under-stated elegance of the British Games – and are for me more impressive in their own way than the Bird’s Nest stadium (which admittedly I have only seen in pictures).
Having been meh about the actual Games (I’m not an athletics fan, or at least I wasn’t), I’m now well and trully sold on the Olympics themselves, as well as the regeneration project. None of the reams of academic literature I have read on mega-projects prepared me for this. Even if I didn’t initially understand all of Danny Boyle’s opening ceremony, which I watched from a hotel room in France, I keep thinking about it. What a fabulous rebranding exercise: changing foreigners perceptions of Britain from a fuddy duddy, stiff-upper lip, U.S. lapdog to a funky modern, creative, musical and quirky place where despite all our talk of inequility and priviledge, we can still talk our octegenarian queen to jump out of helicopters (not many foreign heads of state would even consider such a proposal). No marketing campaign, whatever the budget, could achieve this.
The Olympics are also supposed to inspire young people to take up sports. I’m not sure about this, even if I am looking forward to a swim in the Olympic pool (in two years time when it opens to the public). But the Games have done a real service to women’s sports, not least in the fact that even the most conservative of nations this year sent a women’s team. Our ladies football team has also been winning hearts, and not only because they are perhaps UK football’s only chance of beating Brazil. I predict we’ll want to keep watching these women. As for me, I went to see Canadian ladies take on Team GB at Basketball, and even if I wasn’t bothered in the slightest about the sport beforehand, I’m now keeping tabs on the teams.
The Olympics also seems to be rallying our spirits. The torch seemed to cause a wee stir wherever it went (even if I missed it when it came to my turf in Brixton) and the young volunteers I saw at the park seemed genuinely exited to be there. I’m not sure how far the exitement extends from London, but if even a little of it seeps out, I reckon the Olympics might just help re-inspire us to have faith in ourselves. And there couldn’t be a better time for it. 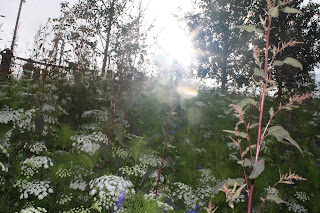 Liberal Democrats made to suffer for unpopular government policies

How should the success of mega-projects be judged?