Regenerating the Turin Shroud – and other stories

Home Regenerating the Turin Shroud – and other stories

Regenerating the Turin Shroud – and other stories 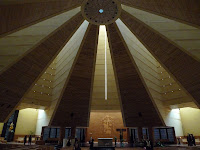 Thanks to good Italian connections, Bartlett spatial planners travelled to Torino for the MSc field-trip to study the various development schemes in the industrial city and the legacy of the 2006 Olympic Games. We saw a wonderful modernist church, the Chiesa del Santo Volto, on the site of the old Bogaro steel mills. Architect Mario Botta preserved a heavy industrial feel for the chunky building which many found ugly on the outside (I kinda liked it), and saved a chimney from the steel mill (the tower with swirly things around the outside). The interior is all light and grace – and emblazoned on the wall behind the pulpit, the Turin Shroud.

Since 1997, Turin has been mobilizing regional, national and European funds to regenerate declining industrial areas of the city. These projects were given a boost by the Olympic bid. While we were there, the CEO of Fiat was threatening to move the headquarters of the Italian car manufacturer to Detroit, a worrying move for a city where so many jobs still revolve around cars. This was evident in the new developments we visited, many of which still lacked public transport infrastructure. Our guide, Professor Silvia Saccomani, said Turin has the highest petrol use per person in Italy and is constantly getting into trouble with the EU for exceeding pollution norms – yet people still remain attached to their cars. She also said housing developments went ahead without schools and other infrastructure. Prof Nick Gallent remarked how different planning in Italy is to Britain – while developers are not bound by the same sorts of environmental contraints as here (with more space to build), they are forced to conform to a list of stipulations governing size of windows, thickness of walls etc.

The Olympics buildings are housed on the edge of town, and many of them are now “empty sheds,” according to Professor Marco Trisciuoglio.

The games were used to make improvements to the city centre, which now houses car-free squares thanks to underground car-parks.

Near the Olympic village, a bridge leads over to the fabulous Lingotto factory, once a Fiat plant and now a shopping centre refitted by Renzo Piano to retain much of its glorious industrial past. Built in 1923, Cars were once built on a ramp that went up through the building. Finished cars emerged at rooftop level, where there was a test track. Le Corbusier called it “a guideline for town planning”. The car ramps are still there, although one is now reserved for pedestrians. On special occasions, wheels still turn as celebrities are whisked from the helipad on the roof out of the building. 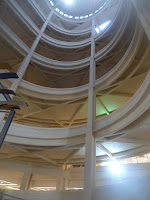 Algeria: Creating the path beyond oil