Singapore hosts the most beautiful modern architecture I have ever come across. I have never been to Adu Dhabi or Dubai (beyond the airport at least), but the towers of New York, London’s City or Canary Wharf, Paris’ La Defense, or Honk Kong have nothing on this tiny city state. It’s not just the buildings, in fact it’s not really about the buildings. It’s about how they work together and with the space around them. My hotel was near Marina Bay, home to the year-old Marina Bay Sands, a gargantuan, three-towered complex that resembles variously a ship, a weird three legged prarie dog, or a wingless plane resting on top of three skyscrapers. With more than 2,500 rooms, it dominates the area and at night laser displays from the roof top bar ensure it attracts attention. I’m not sure that I like the building itself, but it creates a dynamic, playful – joyful even – atmosphere and blends well with surroundings that include the lotus-shaped Art Science Museum, the many towers of the central business district, and from certain angles (i.e. the waterside dinery where I ate one evening) the parliament building. The open spaces are key. Since Sir Thomas Stamford Bingley Raffles founded Singapore, there has been an open field known as The Padang which has succeeded in evading the developers even as it remains at the heart of the CBD. It makes for great vistas, and helps to make the concrete streets feel un-stifling even in the humid, midday heat. The Marina Bay area is wonderful – and completely safe – to walk around at night when the buildings glimmer magically in the water.

Given Singapore’s concerns about water shortages, the city also appears to be taking increasing heed of environmental considerations. ‘Green movement on the rise’ was the headline of a special edition of the Strait Times on May 20 dedicated to the Building and Construction Authority (BCA) awards. This year, a new category recognised the greenest architects, engineers, advocates and innovators involved in the built environment. The winning architect was RSP Architects Planners & Engineers director Vivien Heng, the woman behind the Woh Hup Building.

Singapore is often accused of being sterile, with harsh punishments for those who transgress rules against chewing gum, spitting or generally anything that displeases the government. Certainly, its a very clean place: the Indian temples have some of the smells and the sounds of India, but they are so clean people walk around them in socks (something not advised in India). You can drink the water. Everything works. The metro is clean, efficient, and air-conditioned. And the city is incredibly easy to navigate even for someone who has just arrived. It’s like Asia for Dummies. Very pleasant for a visitor, but possibly a little stifling for residents.

Thanks to a uniform electoral makeup (a consequence of housing policies designed to ensure a balanced social mix), the same People’s Action Party has won every election since self-government in 1959. While I was there, television showed the founding father of Singapore Lee Kuan Yew, 87, stepping down from cabinet. He was Singapore’s first prime minister, serving for 31 years until 1990, and had been in government ever since. Support for his party has been falling, and to counter this, the government has been relaxing its grip. Signs all over the city don’t just forbid you from doing things, they explain why you shouldn’t. Is that progress? I don’t know. 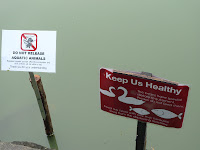 For me, Singapore was not the sterile place I imagined. I quite enjoyed my stay, notably a fabulous day cycling around the Palau Ubin island, a lazy backwater compared to the bustling metropolis. Just 7 km by 2 km, it’s a tiny place, but it’s supposed to give visitors an idea of how Singapore would’ve been like 50 years ago. I’m not sure I saw any construction over one storey high! How quickly things change….. I hope the mangrove swamps of Palau Ubin are still there in ten years time……

Liberal Democrats made to suffer for unpopular government policies

I struggled to find a #book that was deep enough but accessible given lockdown brain strain. Picked up and put down… https://t.co/HgRFRkSMoI

Have found a way to keep #swimming after cutting off half my thumb nail. But am I still eligible for… https://t.co/Q3e0KVwK6A