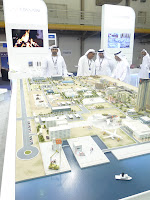 At the Dubai airshow my attention was attracted by a large-scale city model which appeared to be on fire. The Tawazun Disaster Management City is just another of those jaw-dropping planned developments of the region, which men in long white shirts swear they still have funding for. Its billed as a training facility spead over 400,000 square metres, where past and potential future crises are reenacted including natural or man-made incidents such as earthquakes, building collapses, explosions, fires, flooding, oil spills, health epidemics, marine rescue and several others. It’s sad to think the state of the world could be such that there is sufficient demand for such a service to make it financially viable.

Writers’ Centre Norwich, their Escalator scheme for promising new writers, and me

Tech City and the EU

Observer kudos to my former Prof

The Royal Docks ‘The Last Great Development Opportunity in London’