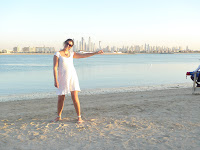 “You don’t build a sustainable community based solely on greed. And thats the problem with Dubai.”
So said a new acquaintance I met at the Emirate on a press trip to the airshow. The people who come to Dubai (whose 400,000 odd population includes only 1,500 natives according to my guide) come for the money, and nothing else.

I had expected to be impressed by the architecture (more on that later), but what I have been musing on since I left Dubai is not the buildings, but how wasteful so much of what they are doing there is. Sure it’s very pleasant for a break (see me enjoying the reclaimed Palm Resort beach), but it’s inefficient to build such big buildings for which 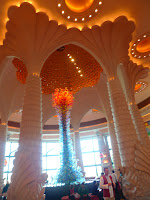 there is no need (a local architect told me above 10 storeys in higely costly and inefficient, and not in any way justified 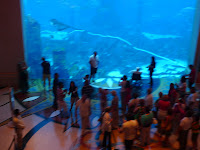 by land costs in what is effectively a desert), and yes its quirky to have a ski resort there, but at what cost? Even growing vegetables costs the earth given the scarcity of water in the area.

Dubai wants to show it can do anything better and bigger than anywhere else. And for the moment, thanks to the oil money, it can. The glass chandelier in a hotel lobby (pictured) is bigger than the one at the V&A, but much less tasteful. The acquarium (pictured) in the hotel lobby of the Atlantis houses enormous sharks, sting rays and all host of sub-acquatic creatures – but they are so much more impressive in the wild. The hotels may have five or six enormous restaurants to choose from, with decent food and lavish furnishings, but they still look like Disneyland and lobster is better enjoyed with lemon juice than in a curry. The lavish parties are fun (thanks to Sheikh Mohammed for a fabulous gala dinner with Tom Jones), but possibly boring after a while.

The Burj Khalifa (world’s tallest building pictured left) is rather ugly I thought, and Sheikh Zayed Road, the strip where all the big buildings are (pictured right), looks rather disorganised during the day (although the lightin g has a certain magic at night). The Emirates buildings and the Burj Al Ara 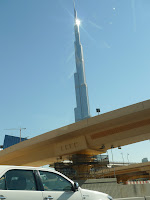 b (7 star hotel shaped like a sail on the coastline – unfotunately the photo I took is from the road but it looks much better, magical even, from the sea) do have a certain beauty to them, but they are in a minority.

Recently, the authorities have discovered the importance of history (and culture) and efforts to save the old Arab trading quarter are underway. There’s a very worthwhile museum in the old fort, which explains the efficiency of the traditional air conditioning systems (wind towers) in the pre-oil era. Ships from Somalia were docking in the port when we took the 1 dirham boat across the creek, a reminder of eras past.

You’d have thought that with the power the local authorities have, planning would be easy. But a friend tells me there is no organisation or structure. The main interchange with Abu Dhabi has apparently been rebuilt three times.

I couldn’t help thinking that when the oil money runs out, the winds will sweep the sand back over all this garguantuan edifices and someday in centuries to come, people will look at them like we do the pyramids and think “what were they doing there?”

A local legacy for Hackney Wick and Fish Island