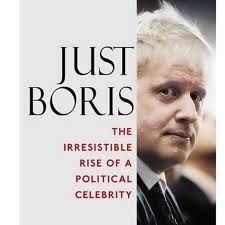 In time for the mayoral elections, I have now finished this illuminating biography of the second main candidate (I read Ken’s auto-biography earlier). Sonia Purnell shows the other side of endearing, bumbling Boris, which I first caught sight of at People’s Question Time in March. A one-time colleague of Boris (they worked together in Brussels), Purnell portrays an ambition, calculating character who uses comedy and buffonery to avoid difficult questions and who wings his way on wit and fortune. Even the scruffy hair is an act, she says.

When a Brussels-based correspondent for The Daily Telegraph, Boris invented a “new mode of journalism,” which Purnell calls the “‘straight-banana’ school of Eurosceptic reporting:” using humour to ridicule expense and waste purportedly caused by the European Commission. She quotes her sources as saying: “What he would say would never be simply untrue, but would be on the edge of what might happen.”

Boris fed British prejudices of loony EU at a time when Europe was big news – Thatcher fell from power 17 months after Boris arrived in Brussels as a direct result of a 1990 EU summit – and became a powerful figure, so much so that the foreign ofice set up a Boris unit to rebutt negative Boris stories, Purnell says. It caused chaos in the Tory party – as Boris recalled in 2005 he was “sort of chucking these rocks over the garden wall and I listened to this amazing crash from the greenhouse next door over in England as everything I wrote from Brussels was having this amazng, explosive effect on the Tory party. And it really gave me this, I suppose, rather weird sense of power.” Interestingly, Purnell suggests that Boris’ natural sentiments are pro-EU – a result of growing up in Brussels with a eurocrat father.

His subsequent career was characterised by friends in high places, high-jinks, wit – and a degree of luck. Witty perfomances on Have I Got News for You gave him a national platform and soon he was running for mayor. But a disorganised campaign initially saw him lagging Ken – until Consevative Party HQ imposed Lynton Crosby, an Australian political strategist known as the ‘Wizard of Oz’. Boris HQ was transformed to become “more boot camp than bohemian hangout,” as the Spectator regime had been – and Ken sented defeat.

The big question – where does Boris go from here? Purnell is convinced that even if noone else does, Boris’ self-belief means he believes one day he could be prime minister.

A baby boom in London

My last Toastmasters of Paris speech.