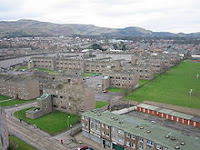 This evening, I went to see what the good folks at the Joseph Rowntree Foundation had to say about life in low-income neighbourhoods. Presenting the results of a three-year study into the relationship between poverty and place at the NLA, researchers from Sheffield Hallam University didn’t really have anything new to say (although Professor Ian Cole had a great turn of phrase and should do TV). The idea was to give ordinary people a voice, and what they had to say should be a surprise only to people who are out of touch (and sadly, those people probably aren’t listening). Cole and his team used personal narratives from people living in six “ordinary” disadvantaged neighbourhoods (ie not the worst, statistically) including Oxgangs in Edinburgh (pictured) and West Kensington in London, showing them through short films, photographs and visual narratives. I’m in favour of ramming home the message to policy makers that life is so much more varied than housing choices. But the exhibition, Communities Under Pressure, feels more like an art show than a research project. And I was slightly suspicious that researchers found what they wanted to find. According to them, there was no evidence of Broken Britain, and low-income communities are just as disparaging about benefit scroungers and the work-shy as the hawkiest hawk of the Tory party. I’m not sure if I buy that. Sure, employment options for many are probably not that enticing, and in the short term it may seem preferable to claim benefits. But if there was more social pressure to pay your way, I don’t think you would see generations of families who have never known work. I think people are more resourceful than that, even those whose options don’t look great at birth. I know this view is controversial in England. But having worked in jobs that many people look down their noses at (and been proud to do so), I have respect for the people who do what they have to do to pay the bills, and I know that provided they have a good manager, they get a sense of self worth from it. I agreed with Julia Unwin, the foundation’s CEO, that too often the voices of the disadvantaged aren’t heard in policy debates. And I agree with Cole that the resurgence of the notion of the deserving and undeserving poor is incredibly distasteful. But let’s not gloss over the facts. In some parts of the country, significant numbers of people have given up hope about making a positive contribution to society. We should ask ourselves why.

As for the study’s conclusions about the importance of place, architects are going to be disappointed: it’s not about fancy new buildings and shiny squares. What researchers found was that if your friends and family are located in one part of the world, it takes a certain kind of person to cut those ties and head to the big unknown city. So policy makers should concentrate on making all of Britain better, and not just the parts that work (ie South East England).

Making more of The Thames

Women and children’s rights in the Ukraine

“Where’s Andrea?” My 5 yo calls out lack of #diversity @LEGOLANDWindsor https://t.co/kqncTr9BuE