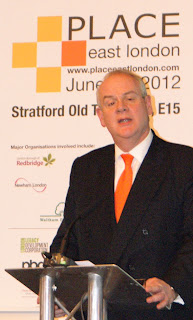 Just ahead of the launch of our Tech City report, I was asked to speak at the Place East London conference on what the cluster could mean for East London jobs. I said our in-depth analysis shows the much-hyped cluster is larger than anyone had previously thought, but the entrepreneurs within it are less diverse than London SMEs or British digital economy firms. To open access to a wide group requires rethinking the entrepreneurship culture, making financing easier for people without contacts to rich people, encouraging skills training and networking in local populations, and a more female-friendly environment (a theme from my undergraduate anthropology degree).

I came after Sir Robin Wales who spoke about Newham’s great efforts – and success – about getting local people into jobs with some of the new employers (not least Westfield) coming to town. GLA Chief of Staff Sir Edward Lister told how the £9-24 billion cost of the Olympic Games will be the “least expensive of the projects” planned to upgrade infrastructure in East London.Newly annointed London Legacy Development Corporation Chief Daniel Moylan closed the event vowing that the park would not become a “shard of prosperity” – like Canary Wharf.