Home The sophistication of Lagos

I have just returned from a second trip, and what struck me this time was not the terrible poverty and chaos (particularly traffic chaos) which blights this fast-growing mega-city and which occupied my thoughts the first time around, but the incredible sophistication that lies within. We saw this in the rapidly smartening headquarters of Nigerian multinationals with big ambitions: economic confidence is growing (see Lagos’ Wall Street pictured above).

That economic confidence is feeding a thriving cultural scene, just as it did in Scotland when the re-establishment of a national parliament led to a culturally blossoming fed by ths renewed self-belief. We chanced upon a Spoken Word event when the poetry was every bit

as compelling as anything I have heard in Paris and London. The organiser told us that poetry events are springing up all around the city.

Sure, the popular governor Babatunde Fashola still has his work cut out. He’s gained local praise through measures to address the horrendous traffic such as a public bus scheme, curbs on the crazy motorcycle taxis, or by moving markets that were blocking up streets (although provisions for the vendors came after they’d been closed down). I also read about social housing projects – although with so many people living in floating slums, this must be a never ending project.

But while the foreign press focusses on life at the sharp end of Lagos, Fashola also has his eye on the high end as the ambitious Eko Atlantic city project under construction (pictured) shows. Designed to create a glittering financial hub for all of West Africa, it also aims to transform the image of Lagos from a corruption-ridden dangerous den of iniquity into a modern mega-city. That won’t happen overnight, but if London, New York and other places have succeeded, then there is no reason Lagos can’t. It’s time to talk about the good news coming out of Africa. 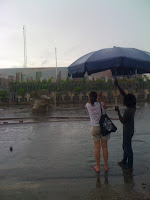 Tale of Tech City is out!