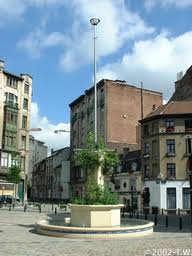 An interesting exhibition at Brussels’ BOZAR presenting three competing visions for the city in 2040. I had forgotten just how scruffy and neglected parts of the city are…. despite the seemingly ever present building works.

One disappointment is the area around my old appartment, the Place du jardin aux fleurs, not far from the canal. During the three years I lived there, the local authorities turned the square beneath my window into a real garden of flowers, a welcome change from the parking lot it had once been. The social housing behind us was also in for an uplift, with tree planting and sports facilities. The area, where I was mugged three times including once on my doorstep, seemed ripe for change – and it did for a while. It hasn’t quite taken off however, and a night out in the area had me instinctively keeping a much beadier eye on my purse than I feel the need to in London. Despite some trendy loft-style canal side housing, efforts to improve the area have not yet been enough and the area risks sinking back unless there is a sustained and amplified approach.